Big news for sauce enthusiasts – bottles of our signature Chick-fil-A® and Polynesian Sauces will soon be available for purchase at retailers nationwide. Starting mid-November, customers can find 16-ounce bottles of Chick-fil-A Sauce and Polynesian Sauce at participating retailers, including Publix, Kroger, Walmart and Winn-Dixie stores, in Alabama, Florida, Georgia, Louisiana and Mississippi. The bottled sauces are scheduled to become available at participating retailers nationwide in early 2021.

And what could be even better than being able to dip, drizzle and pour your favorite sauces at home? When you reach for that bottled sauce on the shelf, know that you’re also supporting the dreams of restaurant Team Members. That’s because all of the royalties received by Chick-fil-A, Inc. from third-party retail sales of these 16-ounce bottled sauces will be donated to the Chick-fil-A Remarkable Futures™ Scholarship program, which helps Team Members with their educational pursuits.

Sauce with a purpose

With every retail store purchase of a 16-ounce bottled sauce, 100% of the royalties received by Chick-fil-A, Inc. from the sale will be donated to the Chick-fil-A Remarkable Futures Scholarship Initiative. Since 1970, Chick-fil-A has helped nearly 60,000 Team Members pay for their education through a total investment of $92 million in scholarships, with $17 million in scholarships being awarded to 6,700 restaurant Team Members in 47 states and Canada just this year. The next set of Team Member scholarship recipients will be announced this coming spring.

In March, Chick-fil-A introduced 16-ounce bottled versions of our two most popular sauces at select retailers as part of a pilot program in Florida. The pilot program made a significant impact, and will fund more than 250 additional scholarships, providing support for Team Members to pursue their educational goals.

Where can I buy Chick-fil-A Bottled Sauces?

Starting mid-November, customers will be able to purchase 16-ounce bottles of our signature Chick-fil-A and Polynesian Sauces at participating retailers, including Publix, Kroger, Walmart and Winn-Dixie stores in Alabama, Florida, Georgia, Louisiana and Mississippi, with a nationwide rollout scheduled for early 2021.

Looking for the perfect gift?

* Proceeds from 8-ounce bottled sauces go back to the individual restaurants from which they are sold. Each Chick-fil-A restaurant is individually owned and operated, and it is up to the franchise Operator to determine the most impactful way to give back to their local communities. 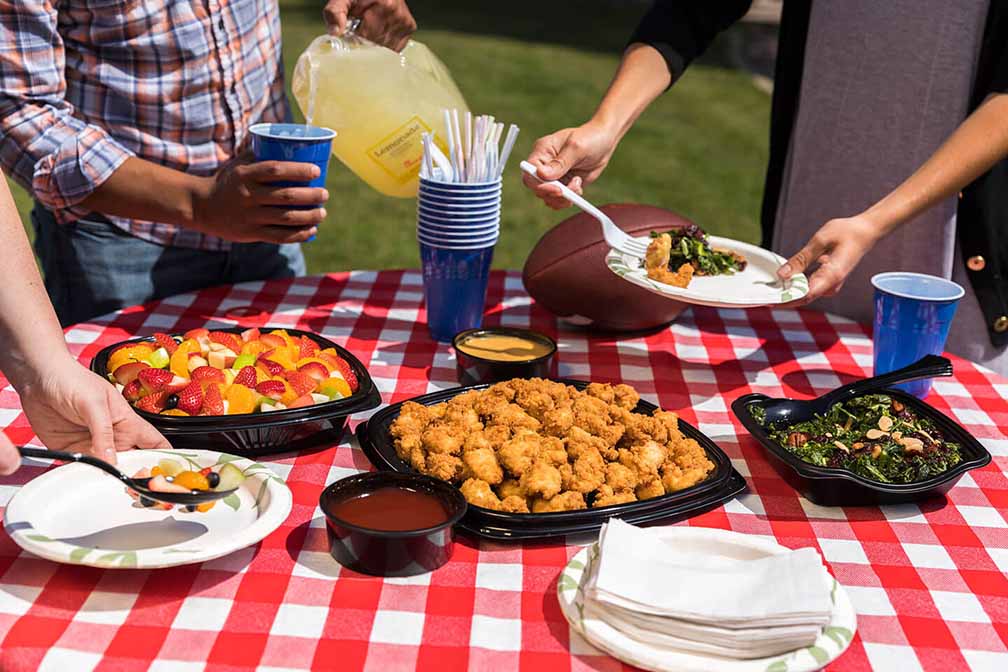 Chick-fil-A Catering: How many does it serve?

We’ve all been there. You’re hosting a party, a meeting or after-school study session. Among the lengthy to-do list: plan the menu! Because you’re the hostess with the mostess, you let Chick-fil-A handle the food. But how much food do you need for the group, and how do you decide exactly what to order from the Chick-fil-A Catering menu? Use the list below as your cheat sheet to order just what you need for any get-together!