College football is more than a sport. It is an experience.

The sound of the fight song booming through a packed stadium, the smell of the grill at a tailgate, the way you hug friends and high-five strangers when your team scores –  on gameday it seems like everyone is a fan, including Chick-fil-A.

But that passion for college football goes beyond the name on a Bowl Game: Chick-fil-A had a large role in partnering to bring the College Football Hall of Fame to its hometown of Atlanta, Georgia.

It all started with the Chick-fil-A Peach Bowl. In 2009, The Peach Bowl, Inc. Board of Directors felt there was an opportunity to bring the Hall of Fame to Atlanta, which is the home of both the Bowl and the Chick-fil-A Kickoff Game.

Steve Robinson, former Chick-fil-A, Inc. Chief Marketing Officer and member of the Bowl’s board of directors, says that in order to bring the Hall of Fame to Atlanta, Gary Stokan, President and CEO of Peach Bowl, Inc. and the board had to get the Hall’s owner, the National Football Foundation, to support moving it from South Bend, Indiana. The NFF also had to be willing to do a licensing agreement to be able to build and operate the Hall in Georgia’s state capital.

“The board under Gary’s leadership accomplished that by saying, ‘We will raise the money, we’ll design it, we’ll build it, we’ll operate it, and put representatives on a new non-profit board here in Atlanta to do that work if you allow us to license the College Football Hall of Fame and build you a new Hall.”

That’s where the NFF had a choice to make. They could either take the Hall of Fame to Georgia or bring it to their own home base of Dallas, Texas. The decision was at a critical juncture.

John Stephenson was the CFA Peach Bowl Board’s attorney and crafted an agreement that ultimately convinced the NFF to come to Atlanta.

“It was a very confidential negotiation, so we couldn’t really shop the idea around Atlanta to see if we could garner support for it,” Stephenson says. “At the end of the day, what I believe swayed them toward Atlanta was our desire to put this in the Centennial Olympic Park District. Within a mile radius of the park, you have other fantastic attractions like the Georgia Aquarium, World of Coke, and the Georgia World Congress Center. And of course, there was the Georgia Dome and now Mercedes Benz Stadium where you have a lot of really high-quality college football in addition to the NFL.”

Building a New Home for the Hall

Initial negotiations were over, and it was time for the real planning and execution to begin. Two of the men who helped the project get to this point jumped into expanded roles. Steve Robinson became Chairman of the Board for Atlanta Hall Management, a new non-profit created to build and operate the Hall. The board asked John Stephenson to be the Hall’s President and CEO.

“Over a process of five years, we raised the money,” Robinson says.  “That was the hardest part.”

Enthusiastic architects and sharp-minded designers crafted the building and the interactive experiences inside the Hall. The only issue, Robinson says, was the money. “We were about $16 million short of being completely debt free. In order to keep the project moving and meet our commitments to all the sponsors who had already gotten in, we had to go out and borrow $16 million in term-debt to finish the project.”

Once again, that’s where Chick-fil-A came in.

“Dan Cathy and I decided we were in a position with almost 20 years of being in the college football space as a Bowl sponsor, and we wanted to make an offer for a longer-term deal that would help the financial position of the Hall,” Robinson says.

That deal was a 30-year commitment that elevated Chick-fil-A’s profile at the attraction. The NFF and Atlanta Hall Management gladly agreed and the Hall took on a new name: The College Football Hall of Fame and Chick-fil-A Fan Experience.

Stephenson says that deal helped him secure other sponsors and essentially turned the Hall into the major attraction it is today.

“With this move, Chick-fil-A became a significant part of writing our city’s history around college football,” he says. “We couldn’t build a small little museum and call it a day. The Hall of Fame needed to be on par with the other attractions in the area. This Chick-fil-A commitment let everyone in town know that we were serious and going for the big show.”

“Thank goodness we did.”

It took 18 months to build the nearly 96,000 square foot Hall of Fame, which includes digital interactive pieces that capture the magic of the entire football experience, as well as artifacts from college football’s fascinating history.

“We built it on time and on budget,” Robinson says.

In 2017, another big opportunity opened up for Chick-fil-A to double-down on its commitment to the Hall of Fame. The Chick-fil-A Peach Bowl reinvested in the Hall, and Chick-fil-A, with the leadership of Chief Marketing Officer Jon Bridges put an advance on its 30-year commitment, making the company the title sponsor.

“Chick-fil-A is all in,” Robinson says. “We’ve been involved in college football for 22-plus years. And this simply raises Chick-fil-A’s long-term commitment to the sport, the health of the game, to all the athletes and coaches -- and not to mention the passionate fans who love it.”

Touchdown: Scoring a Win with Fans Through Personalizing the Experience

That salute to fans and teams starts as soon as you walk in the door. Seven-hundred and seventy-seven football helmets, one representing every team that plays college football, line the wall by the entrance.  As soon as a guest signs in and selects their team of choice, their team’s helmet lights up on wall- and stays lit for the entire day.

“You’re not in the building ten minutes and already you’ve caused something to happen in the building that is specific to your school,” Stephenson says. “Then you go and get school-specific stuff shown to you through special recognition technology.”

That level of interaction makes the Hall a destination.

“People don’t go to college football games for individual players. They go because they have endeared themselves to their school. Our attraction focuses on school first and on the overall experience.”


The Hall of Fame’s historian and curator, Kent Stephens, says that balance of active encounters and history is what makes the attraction, well, attractive for every member of the family.

“This is definitely an experience-driven museum. Large sections of the museum are dedicated to the sport from a fan’s perspective,” Stephens says. “It appeals to a wide audience, including some casual fans who may not be interested in the history but are excited about the bands, the mascots and the cheerleaders.”

But there’s also a deeper dive in the Hall of Fame section of the attraction.

“I think we will be adding more artifacts as we go along, and of course there are some items that are on display permanently.” One of those permanent displays is the Hall’s most prized possession: The Red Grange jersey.

“Red Grange was the Babe Ruth of college football,” Stephens says.  “He was the dominant player of the 1920’s and was the first big star signed by the National Football League.”

There are also a few fascinating artifacts from more recent generations, like the Gary Tyrrell trombone.  He was the Stanford band member who was tackled in a no-time-on-the-clock touchdown scored in the 1982 California-Stanford football game. It also happened to be John Elway’s final college game. The play made its way into history, and the trombone became an unlikely trophy, showcased in the shrine to college football.

It’s a perfect recipe for bringing people of different interests together: Pieces of history, mixed with the immersive experience of feeling like you’re at a game.

John Stephenson says that’s the entire mission. “For some reason, there’s an extra emotional connection to college football, more than any other sport. People are passionate about their school.  They create memories around that school and those games. It’s personal.”

Steve Robinson agrees. “College football is about relationships. It’s multi-generational. Chick-fil-A has a real symmetry with it -  we want to build relationships. In that way, this collaboration is a perfect match.”

Robinson says he’s incredibly proud of the final product and of the process the project’s leaders took to get there.

“College ties and football play a huge role in the lives of families and communities throughout America.  And nowhere is it more important than in the Southeast and Atlanta. Given the rich heritage of the game in Atlanta, it just seemed appropriate for the city to be the new home of the Hall of Fame.”

While the city is now home to the Chick-fil-A College Football Hall of Fame, Stephenson says the home of college football is really at each fan’s school. 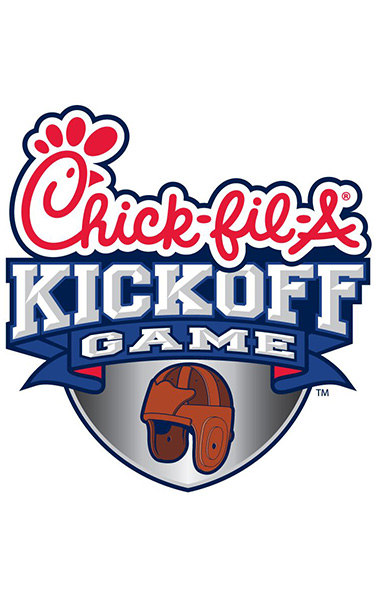