Sometimes, the scariest, most uncertain moments lead to an outpouring of compassion, service and support that can ripple far beyond the places they originated.

The day before Easter, 11-year-old Danny Agee was diagnosed with a brain tumor. It was a devastating diagnosis that required immediate surgery. What followed was an act of generosity in a small Texas town that went viral, taking the youngster’s story into homes across the country. Reporters and camera crews from all over wanted to talk about the special Easter delivery made by Chick-fil-A.

“I’ve never seen a response like this before,” said Hailey Rotenberry, the marketing manager for the North 31st Street Chick-fil-A in Temple, Texas, of the media attention. “For us, it just wasn’t that big of a deal. It was just the right thing to do, and none of us thought it would become as big as it did.”

The story began when Danny complained of headaches roughly a week earlier, and they steadily grew worse with each passing day. His family took him to the doctor and gave him pain medication to help manage the discomfort, but by Saturday, the situation had worsened.

Danny went into seizure, and his father, Joey, cradled his head on the floor while Mandy, Danny’s mother, called 911. Emergency crews responded and rushed Danny to the hospital. They were the only people in the emergency room at the time, so Danny was taken to a room to be seen immediately by all available medical staff.

At this point, Danny was not responsive and had difficulty breathing. A breathing tube was inserted, and, as the family gathered to pray in the hallway, he was taken for an MRI, which showed a tumor pressing his brain against his skull. This had been causing his discomfort and presented a grave threat. Doctors relieved some pressure by draining excess fluid and told Joey and Mandy that Danny would need to undergo brain surgery within the next few days.

As Danny regained consciousness and his seizures ceased that day, his doctors removed the breathing tube. That’s when his appetite started to return. The medical team told him he could eat whatever he wanted prior to midnight, and Danny knew exactly what he wanted — Chick-fil-A Nuggets and Waffle Potato Fries from Chick-fil-A.

“I told him, ‘I’m sorry buddy, but Chick-fil-A is closed on Sundays,’” said Joey. “That really seemed to break his spirit.”

Jenny Pearce, one of the nurses caring for Danny, sprang into action. She got in touch with Rebekah Crawford, the North 31st Street Chick-fil-A’s marketing director, who connected with Samuel Rex, the kitchen director, who sped to the empty restaurant and prepared the nuggets. Rotenberry set out to retrieve the restaurant’s “Eat Mor Chikin®” Cow costume and assemble an impromptu Easter basket.

Less than two hours later, Danny and his family were surprised with a nugget tray, a visit from the Cow and an Easter basket full of candy, mini plush Cows, free Chick-fil-A entrée cards and t-shirts.

“It was such a sweet moment,” Joey said. “I think as bad as he wanted Chick-fil-A and as much as he loved it, the look on his face when he saw that Cow walk in the room was hard to describe. He just sunk down in his bed and had tears of joy, and he put out his arms for a hug from the Cow. Seeing that reaction, it will mean something to us for a long, long time.”

Following a successful surgery, Danny’s prognosis is good. He’s making steady progress in his recovery, and is working with tutors so he won’t fall behind in school. He has also made sure to stop by the restaurant to see Hailey and the rest of the team to thank them for their kindness. 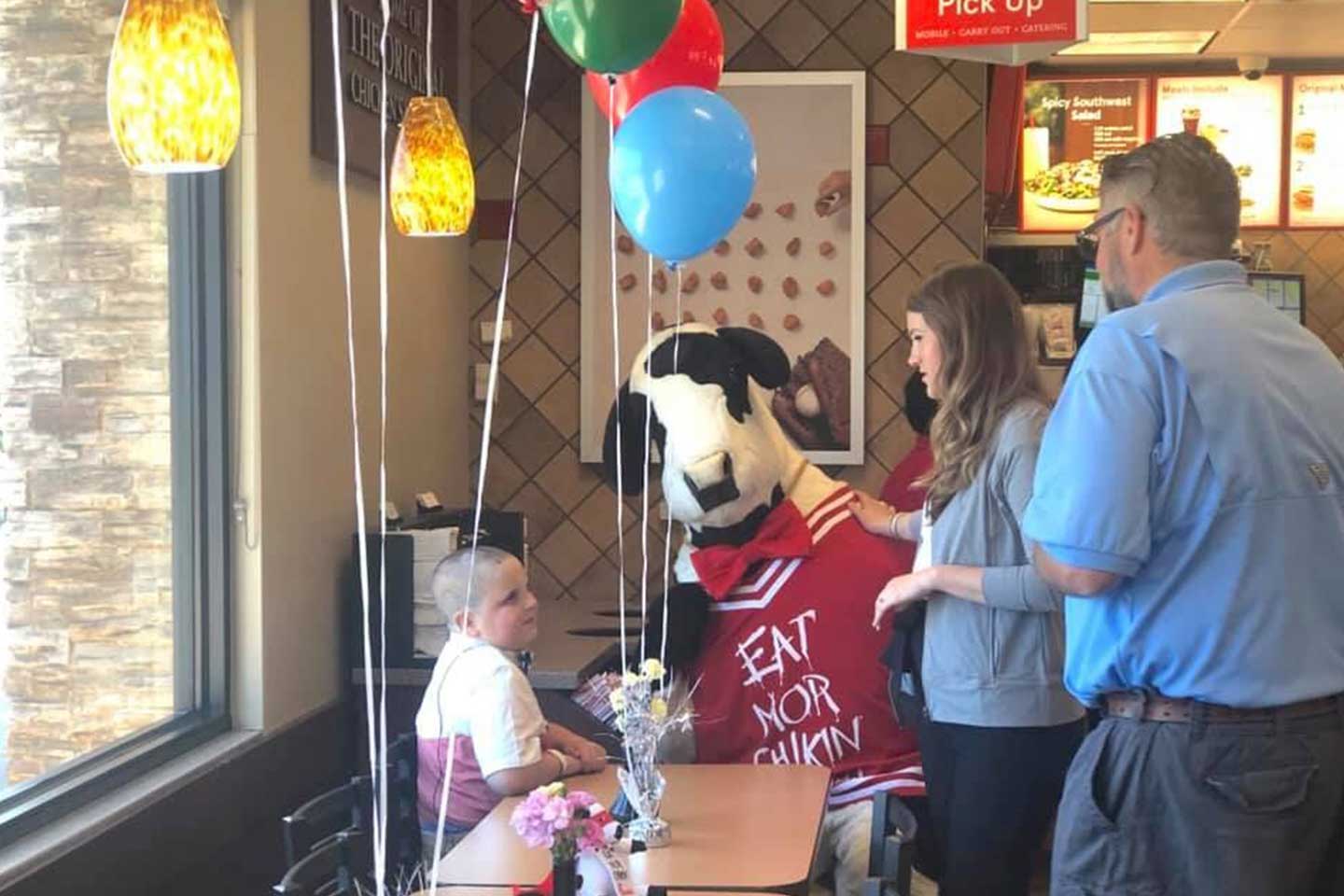 While Chick-fil-A is closed as a restaurant on Sundays, Rotenberry pointed out the company has a long legacy of supporting and serving its communities regardless of the day of the week. She noted her team is always finding ways to give back when they can, even if it means cooking 120 nuggets on Easter afternoon.

“Why would we not do something as easy as go make Chicken Nuggets?” said Rotenberry. “It’s so simple, and no one should be asking why anyone would want to do something kind for someone else. There is so much bad in the world, and I guess that is why this story picked up so much steam — because it’s a message of hope, happiness and, well, chicken.”