One story of a customer’s forgotten change goes viral and sparks a new friendship.

It was just a few dollar bills and some loose change.

But to Marcus Henderson, a Team Member at Chick-fil-A 82nd Street in Lubbock, Texas, it was a chance to do the right thing, and this small kindness turned into something big.

One morning, Henderson was working as a cashier in the drive-thru when Danny Cadra pulled up to the window. Henderson handed him his food, but Cadra was in a hurry that day and accidentally drove off before Henderson could give him his change. It wasn’t even a question to Henderson of what he would do next.

“It was three to four dollars, but I really felt like I should give it back to him,” Henderson said.

Cadra was a regular guest, so Henderson knew he would see him again. He put the change in an envelope and placed it in his pocket. For the next several weeks, he brought that envelope with him every day to work, hoping he would run into Cadra and have the chance to give him his change.

Almost a month later, Cadra returned to Chick-fil-A with his daughter, and Henderson had his chance. He brought the two of them their food, and then reached into his pocket and surprised Cadra with the envelope of his change.

Cadra was amazed that Henderson would go through that much effort for just a few bucks. He took a picture of the two of them and posted the story on Facebook. As often happens with random acts of kindness, it quickly went viral.

First there were blogs. Then, the local TV news interviewed the two of them. Their feel-good story was even featured on The Today Show.

“I’m glad that people are seeing hope in this world from me just doing my part,” Henderson said.

The two became fast friends and forged a connection they hope to continue for many years to come.

“Because of all the great people in this town, great things happen,” Cadra said. “Kindness spreads like wildfire.” 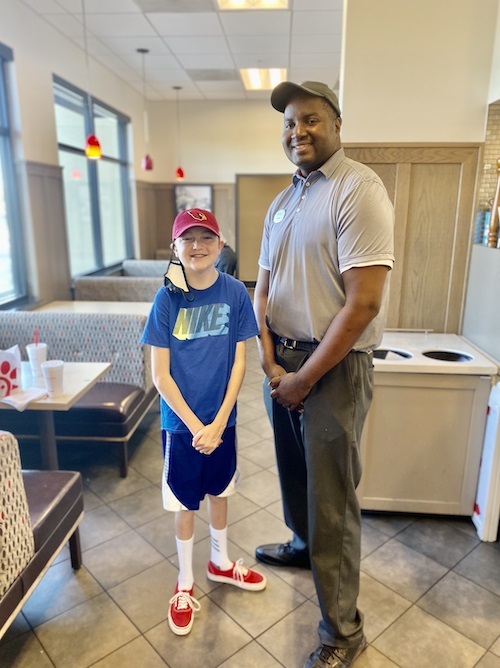