August 20 isn’t just National Lemonade Day. It’s the culmination of a massive fund raising goal, all started by a 10-year-old with a big dream: selling enough lemonade to raise $250,000 for special needs kids like himself. 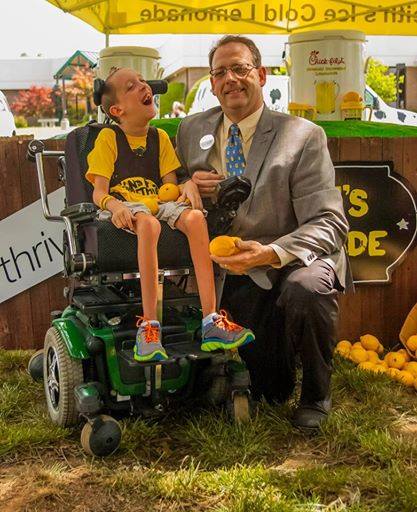 Keith Boyd was diagnosed with cerebral palsy at birth. He can’t run with the other kids. He can’t walk or talk on his own. But he can dream big. And he can draft a business plan for a city-wide fundraiser that has taken the Tulsa area by storm.

Driven by his desire to help other children thrive, Keith became an entrepreneur and the CEO of his own company: Keith's Ice Cold Lemonade Stand. It’s a lemonade stand that takes a stand for special needs children. The mission: to improve the quality of life for the children and their families.

The Tulsa community, inspired by Keith’s story, is rallying around him to help. His mentors, Chick-fil-A owner and operator Arthur Greeno and Thrive15 CEO and business coach Clay Clark, heard Keith’s story and were compelled to step in and give him the tools he needed to thrive in business.

Greeno, who is a board member for the Little Lighthouse, helped to get Chick-fil-A lemonade donated to help Keith’s bottom line.

“We really hit it off right from the beginning,” said Greeno. “I could tell this kid had huge dreams. He’s not at all about sitting still; he wants to take action and do things.”

Tulsa-area Chick-fil-A franchises are also feeding volunteers and displaying posters, which all have the message Stand for Something” on them.

August 20 is National Lemonade Day and the last day of Keith’s donation drive, which started June 18. Visit KeithsIceColdBeverages.com to make a donation and for more on Keith’s story.