Mercedes Kirkland-Doyle remembers how it felt to be different as a child. Born to a single mother, she and her brothers lived with her grandparents in Columbia, South Carolina. Money was tight, and they were grateful for the free breakfast and lunch at school. Every once in a while, when Chick-fil-A® Chicken Sandwiches were sold as a lunchroom alternative, the cafeteria lady would buy one for Mercedes, so she didn’t miss out on what her classmates were experiencing.

Years later, while Mercedes was in high school, she was active in her church youth group, working weekly in a soup kitchen. Through a twist of fate, she was asked to greet families at the door — a momentary favor for a friend. As she stepped into place, the first person she met was a three-year-old girl with older relatives.

“In an instant, I realized this little girl was a lot like me,” says Mercedes. “She was another child from an unconventional home, and I knew how she felt.” Although Mercedes was only 15 at the time, this moment planted the seed for The Good News Community Kitchen, which would blossom many years later in northern Virginia.

Mercedes eventually joined the U.S. Army, serving first as a logistics specialist and later as a recruiter. She then supported her family in the D.C. area as a government employee.

“When I started commuting to work in D.C. from northern Virginia, I literally had to step over homeless people — many of them veterans — when I exited the train,” she says. “I knew I had to do something.”

Tapping into her skills in logistics and recruiting, Mercedes began planning and preparing meals at local shelters every other week, serving 30 to 50 large families at a time. Over time, her Mobile Meals initiative grew to include 10 volunteers who helped feed 200 unsheltered citizens during one hour on Saturday mornings. Eventually, her little band of volunteers added a second meal on Wednesday evenings. 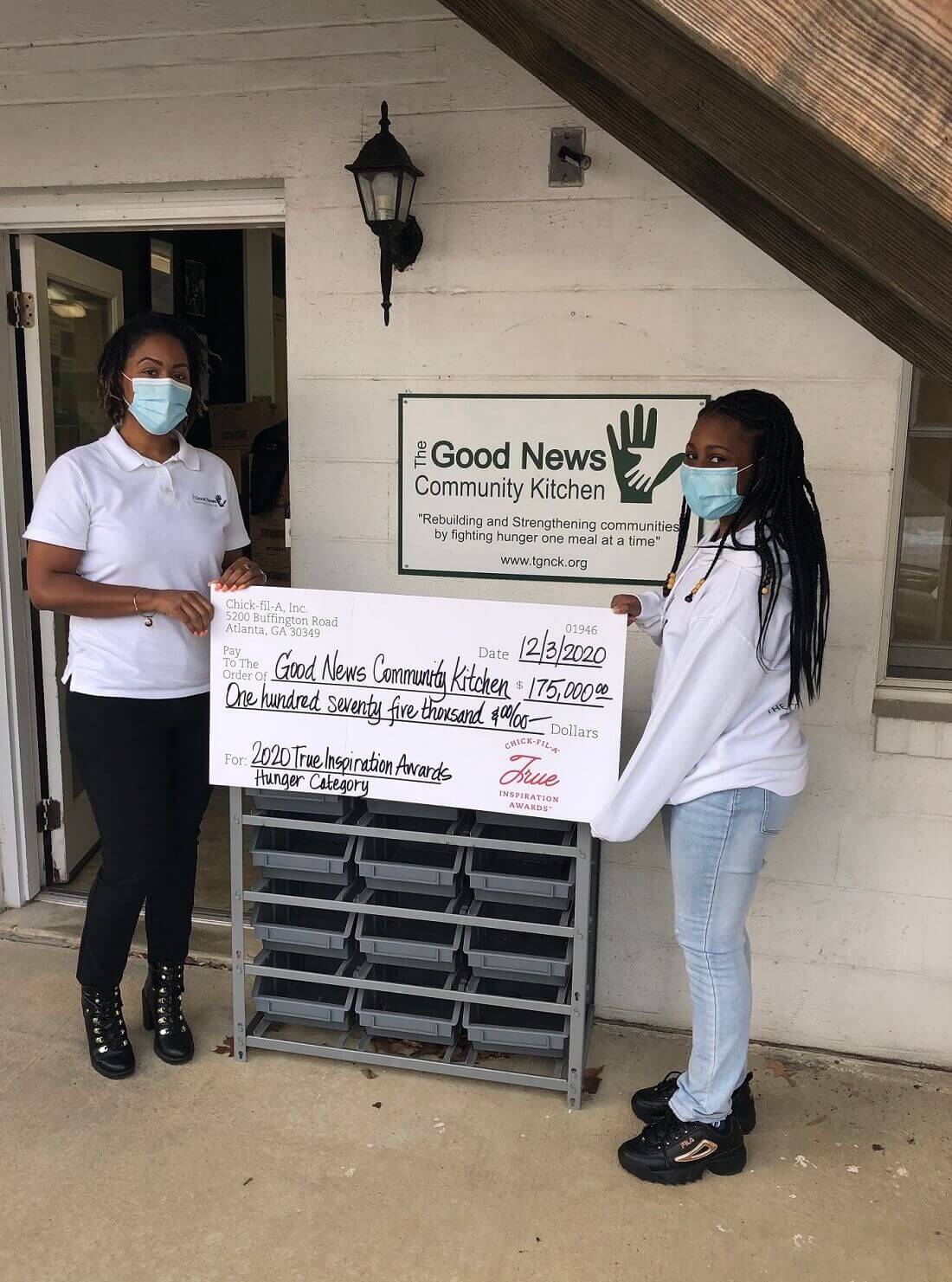 Next came “Meals 2 Go Kits” — delivered on Fridays to students at Title I schools. These kits, providing supplemental nutrition over the weekend for students in need, harkened back to the benevolence Mercedes received from the lunch lady at her own elementary school. It is now her largest initiative — serving everyone from newborn babies to the elderly who have no retirement benefits.

“For the first three years, I did this out of my own pocket,” says Mercedes. “But if you lock in your purpose, your tribe will find you.”

“Lock in your purpose and your tribe will find you.”

Chick-fil-A Operator Luis Hevia’s two restaurants in Woodbridge, Virginia, joined her “tribe” in 2018 during the federal lockdown due to the school shooting in Parkland, Fla. They provided enough  meals to feed employees and students at more than three schools in Prince William County.

Mercedes says that Luis and his team have always embraced social responsibility, even during the most difficult times. “You could always count on them to donate meals when something disruptive was going on in the world, which exacerbated the need for food,” she says.

“The face of the person in need looks a lot different right now,” says Mercedes. “Even in our wealthier neighborhoods, we’re making food deliveries.” She says the organization helped an additional 635 families in 2020 when many schools went virtual, and businesses shut down.

Mercedes tried twice on her own to apply for a Chick-fil-A True Inspiration Awards™ grant, but she was ultimately successful with the help of Luis. They helped Mercedes apply, resulting in a grant for $175,000 which was announced in December 2020.

“We first met Mercedes when she reached out for help feeding the homeless, which is a big issue here,” says Luis. “We did a ‘buy one; give one’ promotion that went over well with customers during the holidays. Her story, passion and commitment are inspiring, and they align beautifully with Chick-fil-A’s corporate purpose.”

Mercedes poured the funding boost into operations, ensuring that the pandemic wouldn’t impede her ability to help others. She paid her office lease and utilities for the year, bought a second delivery van, hired a staff member to manage the office and used the rest to purchase healthy food.

Currently, Mercedes is looking forward to the opening of yet another food initiative – The Good News Garden, made possible with the donation of 1.3 acres in Burke, Virginia. Mercedes, who is also deputy director for diversity and leadership at the U.S. Army Corps of Engineers, recruited an Eagle Scout to build the raised beds, local Girl Scouts to do the planting and a retired military officer to supervise students from Braddock High School to tend to it and help harvest healthy fruits and vegetables for neighbors in need.

“I was fortunate to have a village that helped raise me,” says Mercedes. “They helped me overcome my early circumstances by exposing me to the power of giving back and paying it forward. My message to kids who grew up like me is ‘don’t succumb to your current situation.’ I’m living proof that you can move past it.”

To learn more about the True Inspiration Awards and past recipient organizations, visit www.chick-fil-a.com/true-inspiration-awards.