ATLANTA (March 8, 2017) – Chick-fil-A® announced today plans to open a new Innovation Satellite Office in Georgia Institute of Technology’s Tech Square at the historic Biltmore. This new satellite office, along with the ongoing intern recruitment program that will be housed there, are part of a larger partnership with Georgia Tech, and emphasize Chick-fil-A’s commitment to innovation.

“This new facility will provide a dedicated space for Chick-fil-A to collaborate with the bright minds of Georgia Tech and develop technology solutions that will benefit our customers,” said Mike Erbrick, CIO and Vice President of Information Technology for Chick-fil-A. “Our founder Truett Cathy was a true innovator, and the Innovation Satellite Office is one of the ways we’re continuing his legacy.”

The 6,000-square foot space at Tech Square expands the technology-driven work already taking place at Chick-fil-A’s three internal innovation centers, and is a further testament to the company’s desire to constantly enhance the customer experience. The Innovation Satellite Office is scheduled to open this summer. Chick-fil-A will work with faculty and students to explore design, innovation and development projects among various majors and disciplines.

“Georgia Tech and Chick-fil-A enjoy a long and collaborative relationship, including employing our undergraduates as interns and hiring our graduates. We are delighted to welcome them to Georgia Tech’s Biltmore to enhance our partnership and expand the opportunities for interaction with our students, faculty and staff,” said Georgia Tech President G. P. “Bud” Peterson. “Chick-fil-A joins a prestigious and growing list of corporations that are opening innovation centers in Tech Square to take advantage of the talent and technologies at Georgia Tech and the exciting innovation ecosystem that we have created here.”

Chick-fil-A has a long-standing commitment to innovation, opening the company’s first Innovation Center, called “Hatch” in 2012 as a place to experiment with new restaurant designs, train team members and franchise Operators and cultivate new ways of thinking to both improve the customer experience and generate business. In 2014, Chick-fil-A opened its Test Kitchen, an innovation center devoted to menu enhancements, and in 2016 expanded the innovation space on its campus with its third innovation center, focused primarily on urban expansion and food service design.

Chick-fil-A worked with Jon Mayeske of Cushman and Wakefield in the search for the space.

Georgia Tech provides a focused, technologically based education to more than 25,000 undergraduate and graduate students. Georgia Tech has many nationally recognized programs, all top-ranked by peers and publications alike, and is ranked in the nation’s top 10 public universities by U.S. News and World Report. It offers degrees through the Colleges of Computing, Design, Engineering, Sciences, the Scheller College of Business, and the Ivan Allen College of Liberal Arts. As a leading technological university, Georgia Tech has more than 100 centers focused on interdisciplinary research that consistently contribute vital research and innovation to American government, industry, and business. Additional information about Georgia Tech is available at www.gatech.edu. 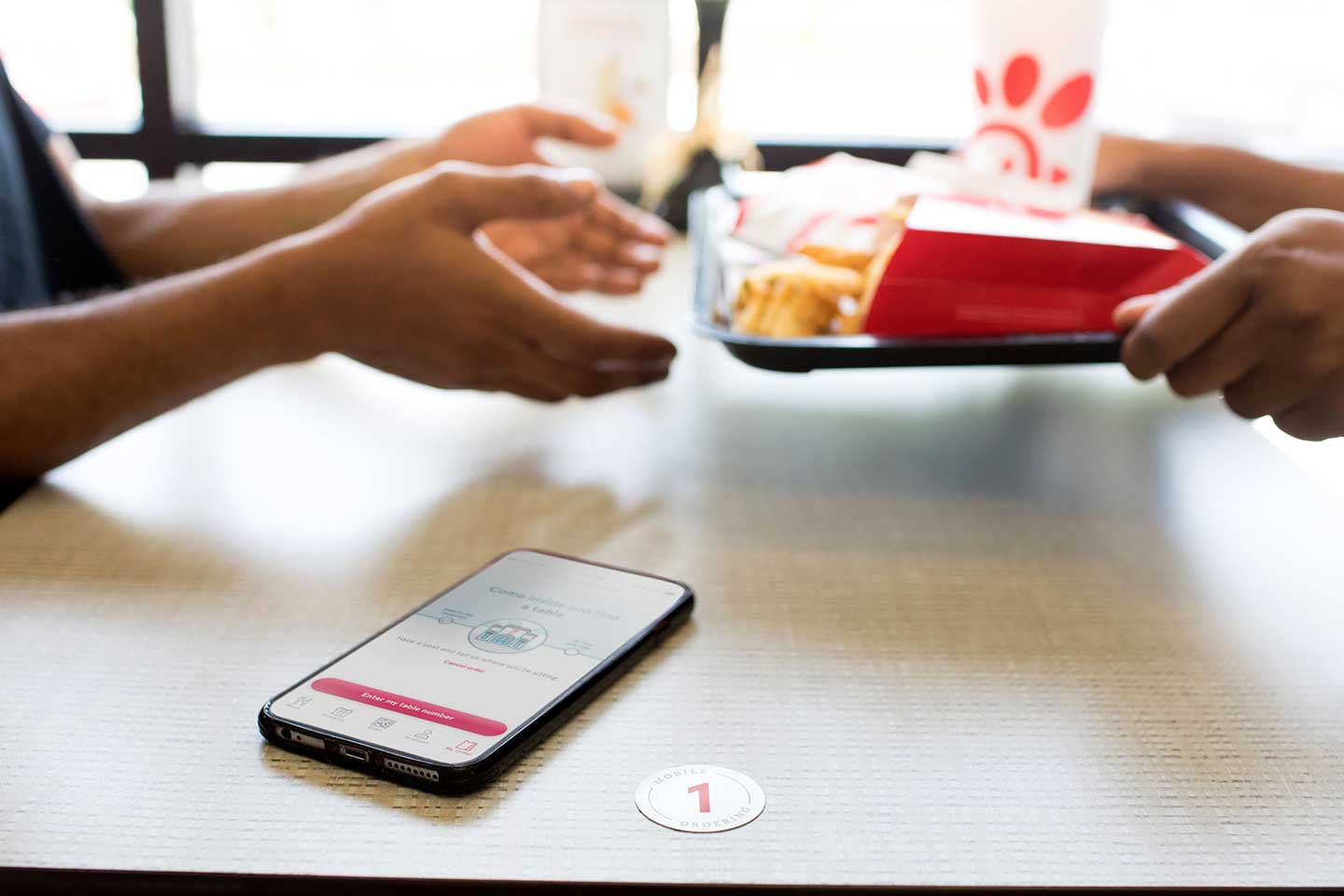 Have a seat with Dine-In Mobile Ordering

Does this sound familiar? You’re a busy parent waiting in line to order lunch for your family, but your kids are all too eager to get to the playground. Or maybe you want dessert after you finish your meal but want to keep your table since you’re enjoying the conversation with some friends.